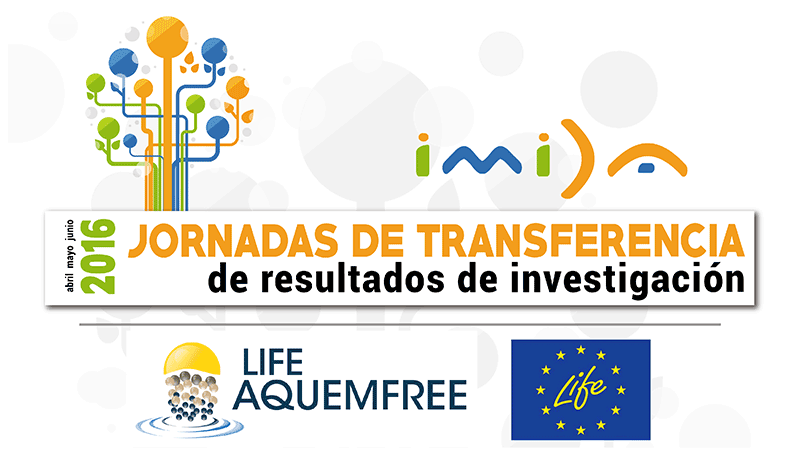 A technical transfer event was held today in the conference room at the Murcia Institute of Agri-Food Research and Development (IMIDA). Results of research carried out within the LIFE-Aquemfree project were shared and the event was aimed at technical staff at the Regional Government’s Department for Water, Agriculture and the Environment.

The aim of the event, which was opened by the director of IMIDA, Juana Mulero, was to promote the system being put into use in order to decontaminate waste water in farms by means of solar photocatalysis and also to gather feedback from the expert technical staff at the Department. The aim, in doing so, is to make the end results of the project suitable for real-life circumstances within working farms and adequately cover all needs.

Speakers included the project manager at IMIDA, Isabel Garrido, who covered the general context of the LIFE-Aquemfree initiative; the scientific coordinator of the project (IMIDA), José Fenoll, who gave a speech entitled ‘Application of solar photocatalysis: results and prospects’; the Director of R&D at Novedades Agrícolas S.A., Lucas Galera, who gave a presentation on the prototype system and the pilot equipment; and the head of the Office for Technology Transfer at IMIDA, Fulgencio Contreras, who provided details of the ‘New Rural Development Programme financing tools for innovation projects.’ There was also an opportunity for a panel discussion and feedback from attendees.

Aquemfree is the acronym for the project entitled ‘In-farm remediation by solar photocatalysis of agro-waste water with pesticides from remnants, cleaning and rinsing’, co-financed by the European Commission LIFE programme. The project aims to provide an alternative, financially viable and ecological technique for completely degrading pesticides in waste water from farms due to remnants in treatment containers and tanks, the rinsing of tanks following use and washing of machinery and equipment, using an innovative piece of equipment installed in working farms. This provides a solution for an existing European issue, one which is particularly present along the Mediterranean.

IMIDA installed a prototype on the Torreblanca farm in June 2015. Following a year of promising results, even during the winter months, the equipment was re-designed in order to make it more compact, simple and suitable for working farms.

Over the coming months, four Aquemfree pilot plants will be installed on a farm in Torre Pacheco that grows vegetables in fields, a lemon tree farm in Santomera, a peach tree farm in Cieza and a greenhouse vegetable-growing farm in Águilas. In doing so, the aim is to check effectiveness in terms of the most representative crops and conditions in the Region and in Mediterranean agriculture.

The project, which is coordinated by IMIDA, is co-financed by the European Commission LIFE programme. The University of Murcia, Novedades Agrícolas S.A. and Fecoam are beneficiaries. The Regional Department for Water, Agriculture and the Environment collaborates through its team of technical staff who are experts in various subject matters, as per the information provided by the Regional Government.

To see the results it clicks here